“Our greatest resource is our water,” says Christopher Larson, president of Wissota Sand & Gravel, a Milwaukee, Wisc. -based aggregate supplier that recently celebrated its 100th anniversary as a family-owned company. As its third-generation owner, Larson is keenly focused on sustainability initiatives, the latest being the installation of new sand washing technology that allows cost-efficient fines recovery and the conservation of valuable water resources. The operation is utilizing an innovative new system that combines a fine material washer and a dewatering screen in a single machine. “Its advantages are far-reaching. Importantly, we’re realizing these benefits at a fraction of the typical costs per ton in this application,” says Larson.

The Aggredry Washer combines a fine material washer and a dewatering screen in a single unit.

When using their prior sand screws, Larson says that the sand was coming out at about 25-percent moisture content. “Per my calculations, we were losing about 400-gallons of water per minute – and the water was going to a part of the operation where it could not be recovered. Replacing that water would require pumping it from a deep well, or finding some surface water within the operation that could be recovered,” he says. It was the latter costly challenge, he stresses, that led to the acquisition of the Aggredry® Dewatering Washer, which is designed and manufactured by Superior Industries. Larson describes the new system as “making a lot of sense in its unique combination of two tried-and-true technologies – sand screws and high-frequency screens.”

The Aggredry system at Wissota features twin-60-inch fine material screws (600 tph) combined with twin-high-frequency dewatering screens. “Our sand is coming off the two screens at 8-percent moisture content, and requires no drying time. Plus, we’re saving about 350-gallons of water per minute,” says Larson.

At an 8-percent moisture content, the washed material is conveyed to finished product stockpiles and is immediately saleable. “With our prior sand screws, the 25-percent moisture content would cause material to stick to conveyor components or to slough off into the wheels of the radial stacker. With the new system, we have eliminated that problem. The dry material is easy to convey even when the stacker is elevated to its full height, allowing us to manage our stockpiling far more effectively,” says Larson. Sand that comes off the Aggredry at 8% moisture requires no drying time.

For optimum fines management at the wash circuit, the Aggredry Washer is engineered with a fines recovery system where minus-quarter-millimeter sand collects in an under flume and is reintroduced back into the sand screw via a water jet. This patented technology saves up to 3-percent of material from a waste pond.

Larson says that fines management is a major concern. “We were concerned whether the water jet on the system should run back into our pump, or back into the sand screw. Superior Industries said that it would be easier to manage the fines with the water jet going back into the sand screw and they were right,” he says, as he cites an example regarding a customer who needs washed manufactured sand with less than 3-percent passing #200 mesh. “With our prior sand screws, we could wash at 50-tph and we would have to wash it twice to get to the 3-percent. With the new unit, we can wash at 100-tph and achieve less than 3-percent fines after washing it just once,” he says.

In the past, Larson says that they had to be very selective on what could be run through the wash plant. “If we hit a dirty spot in the pit, we weren’t able to get enough fines out of the sand. With our new system, we can process dirtier material and still manage the fines on the wash end of the plant. This gives us more throughput without having to be so particular about the material coming from the primary circuit. That’s a big advantage as the face of the pit is always changing,” he says, adding that his operation crushes 2-million tons per year, with about 1.8-million tons per year going through the wash plant.

Larson says his operation sees very little waste. The fines that are washed out of the Aggredry system go to a set of cyclones where material between minus-#200-mesh and #400-mesh is processed out, stockpiled, and is sold as bedding material for nearby livestock facilities. Any material that is minus-#400-mesh is treated within a clarifier/flocculant system, with the solids being pumped into a retaining area and used for reclamation.

Prior to the purchase of the new Aggredry system, Larson conducted considerable research into the various sand washing solutions on the market. Compared to the use of cyclones and pumps, which can produce similar results in some applications, he especially liked the reduction of horsepower needed to operate the Aggredry washer. John Bennington, product manager for the Superior Industries Washing & Classifying Division is an industry veteran with hands-on experience in every sand washing method.

“The traditional sand screw does its job, but it requires the extra real estate for drying stockpiles. Material with up to 25-percent moisture content will need one- to two-weeks of drying time,” says Bennington. “Operations need a plan to handle the water runoff from the stockpiles. Plus, the wet sand causes excessive wear and tear to tires and components.”

With the use of the conventional dewatering screen, says Bennington, operations lose up to 15-percent of fines to a waste pond, which requires costly and frequent maintenance. “The Aggredry fines recovery system saves at least 3-percent of that material for saleable product. At 100-tons per hour, that’s three or more tons per hour, and more than 30-tons – or a truckload of saleable material during each shift.

Producers need to calculate that additional profit, and the operating costs per ton into the overall picture as they examine various sand washing methods,” he says.

Like many producers, Wissota Sand & Gravel is facing an ever-increasing demand for washed aggregate. “But we must meet demand while always protecting our valuable water resources,” says Larson. “We dug a deep well back in the 1980s. There were seasons where that well would run continually. Throughout the 2015 season we could cut well use to a total of only 400-hours. As of the latest season, we cut that water use in half. Ongoing sustainability is the mission.” 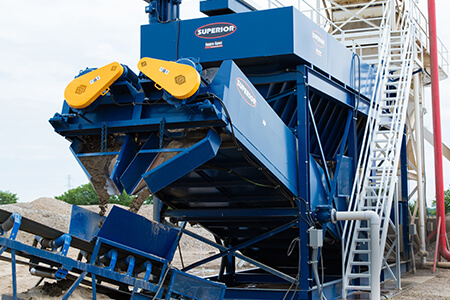 Wissota Sand and Gravel reduced the moisture content in their processed sand from 25% to 8% by incorporating Superior's Aggredry® Washer. The new machine helps the company meet demand for washed product and lessens their operation's footprint.
Superior Industries