The cost of aggregate delivery, transport and handling via truck or loader is at record levels and rising. Consequently, a growing number of operations have converted to rail, barge, or ocean vessel-based aggregate distribution centers. And, many of these savvy operations also realize that beyond efficient delivery methods, it is also imperative to streamline unloading, stockpiling and storage methods to eliminate additional material handling costs.

Hubbard Construction of Winter Park, Florida, is curbing trucking and fuel costs by using truck unloading and conveying systems – and they are even automating the process. Truck unloading systems improve cycle times, increase safety, minimize loader use, and guarantee product quality by removing any extra handling of material. Plus, when Hubbard uses its truck unloaders in combination with automated telescoping radial stacking conveyors, the payback is even greater in product quality control and costs-per-ton savings. 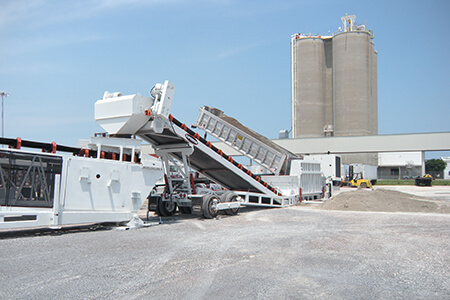 As one of Florida’s largest heavy civil construction companies, Hubbard is organized into four construction divisions, three paving divisions, and a materials division. The scope of its work includes complex highway projects, site development, paving, utility and drainage systems, surveying, RAP and hot mix sales, and state-of-the-art bridge building. In the latter half of the 20th century, Hubbard was closely involved in the development of major Orlando area attractions such as Walt Disney World and the NASA Kennedy Space Center.

Mike Stacey is the manager of plants and materials for Hubbard Construction. He explains that the operation decided to upgrade its material handling methods at its ocean vessel aggregate distribution center as early as the summer of 2009. Since limestone is prevalent within the Florida region, Hubbard gets its granite and hard rock materials shipped from a sister company in Canada. They receive up to nine 58,000-ton ocean shipments per year. The ships unload into a hopper which feeds a fleet of 12 to 15 dump trucks that transport material to the newly streamlined stockpiling and storage area located about an eighth of a mile away.

Hubbard operates two RazerTail® Truck Unloaders and two Telestacker® Conveyors, each manufactured by Superior Industries. The operation is running both sizes of RazerTail truck unloaders, one with a 72-inch belt and the other with a 48-inch belt. Each can quickly and easily transfer material from the dump trucks onto either of the Superior TeleStacker conveyors. For example, the 72 RazerTail truck unloader allows the transfer of up to 25-tons of 100 PCF material in just minutes. A removable discharge hood then directs material onto the belt on the telescoping radial stacking conveyor – and as the unloader requires only a 22-inch earth ramp, the operation can easily move the unit within the site, and be up and running again in under two hours. 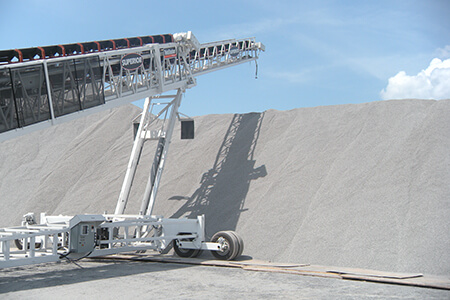 “Before the acquisition of this new equipment, our trucks would travel to the stockpiling area, and then simply dump the material on the ground. We had two loaders and two operators to load the material into a hopper which fed a conventional stacker. Once the pile got high enough, we had to stop to move the stacker back to allow for more volume. So this method meant a lot of cost and time involved in additional material handling,” says Stacey.

Now, says Stacey, the operation has cut truck cycle times to about 45 seconds per truck versus a loader that had to dump into a hopper at five yards at a time. Also, there is an improvement in safety initiatives via the elimination of traffic congestion between multiple trucks and loaders where accidents may commonly occur.

Importantly, Hubbard found that when combining a RazerTail truck unloader with a TeleStacker conveyor, they could gain even greater control over product quality control and cost-per-ton savings. “The truck unloading systems and telescoping radial stacking conveyors have eliminated the two loaders we used previously, which has certainly delivered substantial savings in labor, fuel and maintenance,” says Stacey. 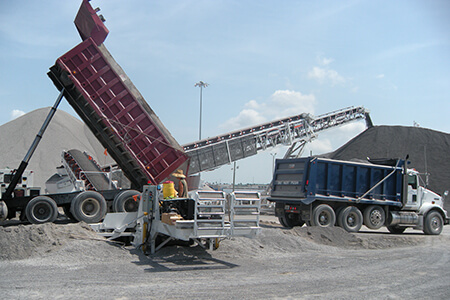 Product quality is equally important to the Hubbard operation. Stacey says that the shift or freefall in the hatches during the ship unload often causes material to go out of gradation. “The TeleStacker conveyor allows us to reblend the material,” he says.

According to Superior engineers, a standard radial stacker can help minimize stockpile segregation, but it cannot overcome it. An automated telescoping radial stacker is the only solution to creating a fully desegregated stockpile. It stockpiles in very thin lifts or layers, with each layer consisting of a series of windrows of material. To accomplish this, the conveyor is in motion continuously – so automation is highly preferred over manual operation.

Automated telescoping radial stacking conveyors also provide increased stacking capacity over standard radial stackers. Up to 30% more material (depending upon conveyor size) can be stockpiled under a telescoping stacker. This is particularly important to Hubbard as they wish to maximize stockpile volume on their limited three-acre material storage footprint. Also, the operation can program the telescoping radial stacking conveyor to create stockpiles in many different shapes, sizes, and configurations. This unlimited stockpiling flexibility results in higher production capacity at a lower cost.

Lastly, Stacey says that his team is pleased with the support and training they received from Ring Power, the Superior Industries dealer and from the Superior product engineers and service technicians. “They spent a lot of time onsite with us throughout startup and into production,” says Stacey.

Since 1920, Hubbard Construction has paved the way for hundreds of public and private projects. The company is a subsidiary of the Hubbard Group of Orlando, Florida. Its parent company, Eurovia, operates through a network of 300 agencies and 1035 production sites in 17 countries around the world. 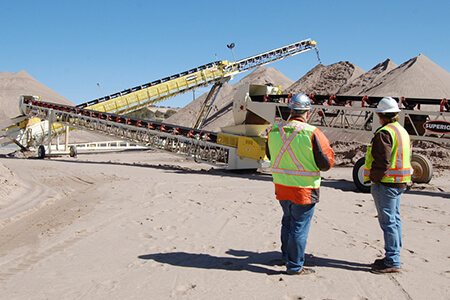 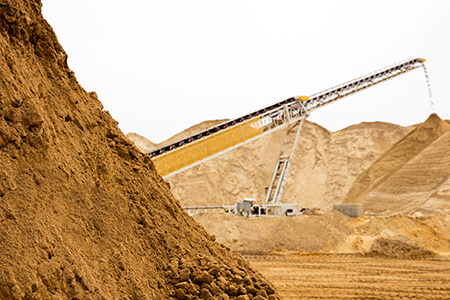