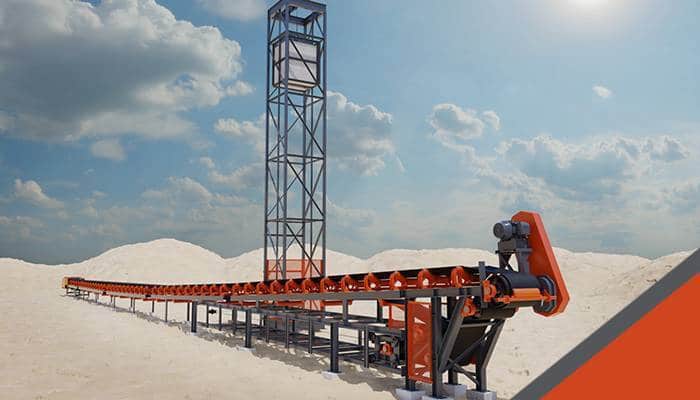 Zipline Conveyors target bulk producers looking for overland conveyors that require little or no pre-engineering for express deliveries and are designed for quick assembly in the field. Today, with the addition of the new EXT Series, Zipline Conveyors are available in lengths up to 2,500 (762m) feet and belt widths up to 48-inches (1,220mm).

All of the conveyor components — like the pulleys, idlers and scrapers — are also manufactured in-house. This unique advantage means higher quality, faster deliveries and all-inclusive support from Superior Industries. 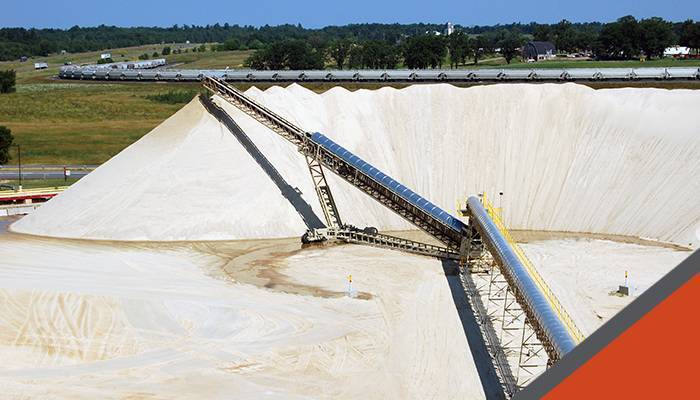 “During North America’s fracking boom in the 2010’s, Superior quickly became the preferred manufacturer of conveyors for unloading, transferring and stockpiling frac sand,” says Roland Duer, the conveyor manufacturer’s manager of business development throughout Latin America. “Those customers appreciate high quality products, dedicated aftermarket support and our uniquely integrated manufacturing, which uses our very own idlers, pulleys and accessories in addition to the conveyor structure we design and build.”

At the writing of this release, more than 750-meters of conveyors were en route to NRG’s new frac sand plant. Highlights include a 56-meter TeleStacker® Conveyor. These automated radial telescopic stacking conveyors are capable of building extreme volume stockpiles in excess of 302,000 metric tons. Additionally, NRG will utilize a pair of portable RazerTail® Truck Unloaders to transfer frac sand from trucks. Other conveyors will be installed throughout the dry plant creating a quiet, environmentally-friendly material handling operation.

“Having Superior as a supplier is a clear example of the importance for NRG to incorporate good technologies and best practices that take care of the environment and, at the same time, offer solutions to the customers,” said César Güercio, CEO of NRG Argentina S.A.

Superior says it is proud its conveying equipment will be an active participant in Argentina’s effort to achieve energy independence. 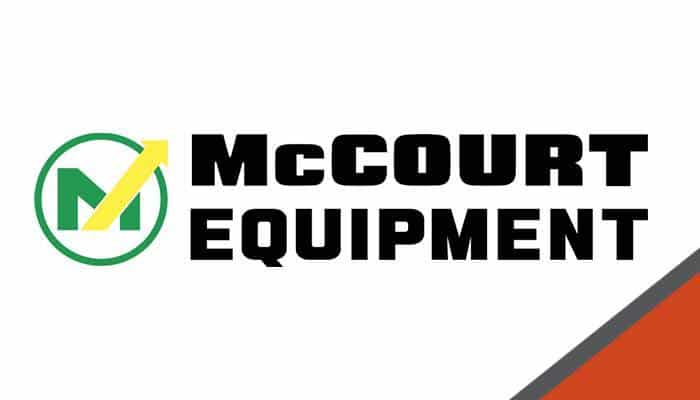 “McCourt Equipment has a long history of supporting their customers with a strong inventory, application-experienced resources and responsive service,” said John Garrison, Superior’s vice president of sales. “There’s no better partner in the South Central United States to supply and support the market with these products than McCourt Equipment.”

In 2016-17 – after several acquisitions and some in-house design projects – Superior debuted a brand new group of crushing, screening and washing equipment. These products joined an existing and evolving conveyor and custom plant line to form a complete portfolio of aggregate processing and handling solutions from Rock Face to Load Out®. Products include jaw, cone, HSI and VSI crushers; horizontal, inclined and grizzly feeding vibratory equipment; scrubbing, classifying, washing and dewatering solutions; plus unloading, transferring and stacking conveyors.

“Our two brands align well because we’re highly focused on the needs of our customers and energized to do the right thing for them,” said Paul McCourt, president of McCourt Equipment.

Founded in 1999, McCourt Equipment is built on a foundation of generational experience in the aggregates industry. The dealer has quickly gained the respect of hundreds of producers because of its high energy, willingness to go the extra mile and respect for their customers’ pursuit of producing at the lowest cost per ton. McCourt Equipment is headquartered in LaGrange, Texas, with dozens of employees spread throughout the region. 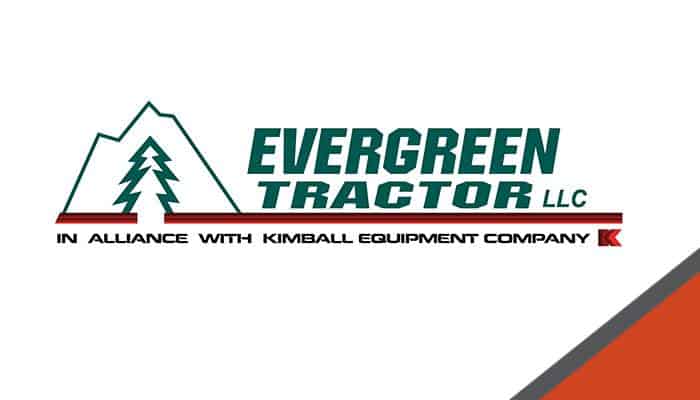 Zipline Conveyors target bulk producers looking for overland conveyors that require little or no pre-engineering for express deliveries and are designed for quick assembly in the field. Today, with the addition of the “This new partnership pairs one of the most experienced and respected quarry suppliers in the country — Kimball Equipment — with Evergreen Tractor, one of the best service teams in the Pacific Northwest,” says Seth Wheeler, a territory manager at Superior Industries. “It combines know-how with getting it done.”

As Superior’s full line dealer, Evergreen Tractor will sell, service and support popular products like the TeleStacker® Conveyor, Patriot® Cone Crusher, Guardian® Horizontal Screen and Aggredry® Washer in additional to all other products in the manufacturer’s growing and energized crushing, screening, washing and conveying portfolio.

“Based on their new partnership, Evergreen Tractor will stock locally, have access to Kimball’s vast stock at nine other western branches and utilize the dealer’s unmatched engineering and application experience,” says Wheeler. “This will fuel Evergreen’s determination to help their customers succeed.”

Evergreen Tractor is one of the Northwest’s leading sales and rental companies of aggregate equipment, attachments and parts. The Seattle-based dealer has earned a strong reputation for rapid response, qualified service and excellent aftermarket support. Meanwhile, Superior Industries and Kimball Equipments’ relationship dates back to 2004. The Salt Lake City-based company is already the aggregate equipment company’s full line dealer in Utah, Arizona, Nevada and the southern two-thirds of Idaho. 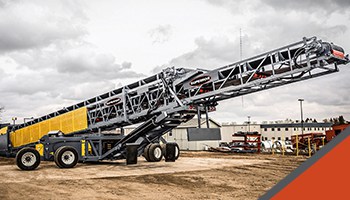 Morris, Minn. – Superior Industries, Inc., a US-based manufacturer and global supplier of bulk material processing and handling systems, introduces a standard new set of TeleStacker® Conveyor models with onboard power. These self-contained, radial, telescoping conveyors are equipped with a 96kW Cat 4.4 Tier 4 Final engine. The most popular applications for the new models will be remote quarrying and mining sites, where access to permanent electrical power transmission is not practical.

Today, self-contained TeleStacker Conveyors are designed in 36-inch (914mm) belt widths and fully-extended operating lengths of 110, 130 and 150-feet (34m, 40m and 46m). As always, Superior says its engineering team will collaborate with bulk handlers requiring custom widths and lengths. Other standard features include XTP swing axles, hydraulic drives for the main and stinger conveyors, Superior brand idlers and pulleys, plus an onboard counterweight. Additionally, the manufacturer offers dozens of options to match the TeleStacker Conveyor to its environment. 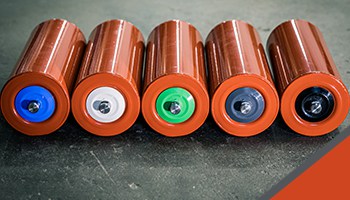 Morris, Minn. – Superior Industries, Inc., a U.S. based manufacturer and global supplier of bulk material processing and handling systems, will revolutionize the conveyor idler market when it introduces a group of application-specific idlers seals at CONEXPO-CON/AGG 2020. They’re one of a dozen new products the company will introduce in booth C31389.

“These next-generation SpinGuard® Idler Seals will offer greater protection in applications known to expose bearings to fugitive material prematurely,” says Paul Schmidgall, the chief engineer of Superior’s conveyor components division. “We tested dozens of seal iterations over more than five years of and we think we have some pretty robust options.”

Each class of seal will be easily recognized by a unique color:

Superior says lead times for these application-specific idler seals can be equal to their day-to-day, industry-leading production response times.

See Superior inside Central Hall at booth C31389 and start with the ones who change the game. 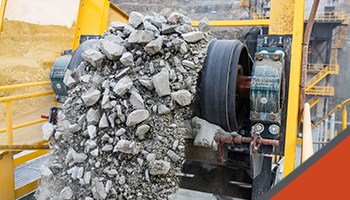 Morris, Minn. – Superior Industries, Inc., a U.S. based manufacturer and global supplier of bulk material processing and handling systems, will show a brand new conveyor drum pulley at booth C31389 during CONEXPO-CON/AGG 2020. It’s one of a dozen new products the company will introduce during the Las Vegas trade show in March.

Known as the Prime™ Mine Duty Pulley, this drum style conveyor pulley is manufactured in diameters from 4” to 30” and face widths of 12” to 78” (x). It’s designed and built with a solid steel end disc, which eliminates welding at the hub of the pulley. Applications for the new pulley include aggregate and mine duty conveyors using fabric belts, which start and stop under full loads frequently.

“Our Prime Mine Duty Pulley has many of the same design characteristics of Mine Duty 2.0 and Super Duty drum pulleys, but its optimized design yields a lower weight,” says Alan Schmidgall, a vice president with Superior. “That means we can offer a more economically-friendly option and include many of the features our customers said they require.”

The Prime Mine Duty Pulley is one of four standard, pre-engineered conveyor pulley models available from Superior. Other designs include CEMA, Mine Duty 2.0 and Super Duty. Superior offers custom-engineered pulleys from its Core Systems® Design team.

See Superior inside Central Hall at booth C31389 and start with the ones who change the game. 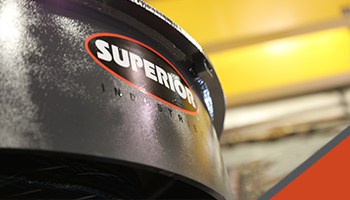 Morris, Minn. – Superior Industries, Inc., a U.S. based manufacturer and global supplier of bulk material processing and handling systems, is excited to announce a new partnership with AMPCO Minerals. This investment furthers Superior’s goal to improve responsiveness, reliability and quality of its North American supply chain.

“It’s an investment in a team whose core members each have more than 30 years of experience developing crushing and screening technology for international markets,” says Jarrod Felton, president of Superior Industries. “These are accomplished professionals that people in our industry know and trust.”

Working in a brand new purpose-built factory in Shanghai, this fully-integrated partner will collaborate closely with Superior’s manufacturing efforts in North America, providing access to a dependable, high-quality supply chain.

Beyond North America, global customers will benefit from access to complete crushing, washing, screening and conveying machinery from Superior manufacturing operations located in the Eastern Hemisphere.

“Whether it’s application advice, service response or manufacturing efforts, our goal is to be closer to our customers,” says Felton. “This partnership allows us to continue improving our results for them.”

About Superior Industries, Inc.
From Rock Face to Load Out®, Superior Industries engineers and manufactures groundbreaking bulk material processing and handling equipment and cutting-edge components. From its headquarters in Morris, Minnesota, USA, the manufacturer supplies bulk crushing, screening, washing and conveying systems and related parts for industries like aggregates, mining, bulk terminals, agriculture, power and biomass. In addition to its home plant, Superior operates from several other U.S. facilities and internationally-based plants in Canada, Brazil and China. 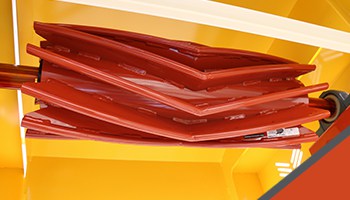 Morris, Minn. – Superior Industries, Inc., a U.S. based manufacturer and global supplier of bulk material processing and handling systems, has named Belt Tech, Inc. as its newest conveyor components distributor. The 40-year-old family business will stock, sell and service the manufacturer’s conveyor idlers, pulleys, scrapers and accessories throughout the Central Appalachia region of the United States.

Founded in 1981, Jim Hamm built a solid and lasting reputation of a quality-focused, customer-oriented organization. Belt Tech has provided beltline design, installation, repair, maintenance and service. A new partnership with Superior creates a brand new Belt Tech with a comprehensive package of conveyor components from head to tail.

“Both Belt Tech and Superior have legacies of quality and care and I think it’s those two traits that brought our businesses together,” says Justin Hamm, president of Belt Tech and son of the founder. “We don’t take our service responsibility lightly.”

Belt Tech will represent Superior’s conveyor idlers, pulleys and accessories in southern West Virginia, western Virginia, east Kentucky and east Tennessee. A Washington, Indiana-based company with a similar name — Belt Tech Industrial — is also a Superior components distributor. According to Superior, the company is proud to be represented by two distinct companies who share the same name and rapid commitment to customer service. 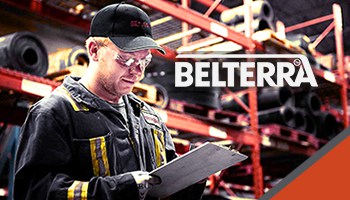 Morris, Minn. – Superior Industries, Inc., a U.S. based manufacturer and global supplier of bulk material processing and handling systems, announces a new partnership with Canada’s largest distributor of conveyor belting, components and other bulk material handling solutions. Belterra, a 50-year-old distributor with 19 locations throughout the country, will stock, sell and service Superior’s conveyor idlers, pulleys, scrapers and accessories in Quebec.

“We’re excited to partner with such a respected distributor who is well-known for carrying significant inventory, performing prompt service and having high character,” says Ryan Loge, Superior’s conveyor components sales manager in Canada.

With Quebec branches in Montreal, Québec City and Saguenay, Belterra is well-positioned to take care of customer requests quickly. The distributor will stock a standard collection of Superior idlers, pulleys, belt scrapers and other conveyor accessories. Additionally, the Quebec-based team will work closely with product and project managers at Superior to supply dry bulk producers with custom solutions backed by industry best manufacturing lead times.

Belterra has proven itself to be a valuable partner, advisor and product expert to industries across Canada for more than four decades. The company’s dedication to timely results, quality products, extensive selection and flexible service helps reduce costly downtime while improving your efficiency and output.